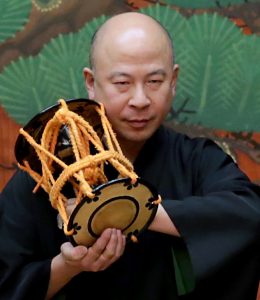 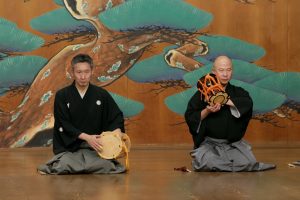 1975
In the first grade of junior high school, aiming for the way to the small drum
Introduced as an uchi-deshi to the Living National Treasure, Hiroro Sowa.
At the same time, he joined the Kyoto Nogaku Training Association. (12 years old)

1996
Collected by the Koryu Soke

2003
The column “Nogaku Jigen” is serialized in the Kobe Shimbun every other Monday evening.

2010
Appointed as a director of Nohgaku Performers Association

2020
Nohgaku Performers Association Osaka Branch Manager
In recent years, the number of performances in Tokyo has increased, and he has participated in performances nationwide, mainly in Kansai.

《Performance overseas》
1980
Performance in Madrid, Spain. king
Worked for the Kongo Noh “Aoi no Ue” shite Kongo Sect family and others in the garden of the palace. Spanish King Noh

1984
Japan Foundation ASEAN performance.
Worked for “Sanbansan” Chisaku Shigeyama and others in the Philippines, Indonesia, Thailand, and South Korea.

2006
At the cruise liner Pacific Venus
Nogaku performance during an Asian cruise. Participated as a performance leader.

2010
Performance in Greece and the Netherlands. Athens Acropolis Amphitheater and
At Amsterdam Music Hebow
Worked for “Daiwaka”, “Yume no Ukihashi”, Shite Umewaka Gensho and others.

Performance at the House of Culture of Japan in Paris, produced by Tadashi Ogasawara